Georg Efraim Fritz Arlberg was born in Leksand, Sweden on 21 March 1830, and died on 21 February 1896 in Kristiania (Oslo). He was an opera singer, vocal teacher, translator, and composer − preferably of vocal music. He was employed at the Mindre teatern in Stockholm during 1854−58, and later at the Royal Opera from 1858 to 1874. He was married to the violinist Anna Maria Rudolfina Neruda. In 1868, he became a member of the Royal Swedish Academy of Music. 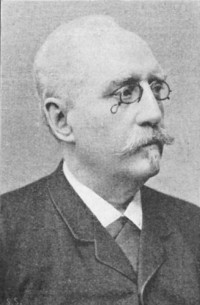 Academic years and career in Stockholm

Fritz Arlberg was born in 1848, the son of an assistant vicar Georg Arlberg and Margareta Lovisa Sahlmark in Leksand, Sweden, later becoming a student at Uppsala University, where he completed his kameralexamen (a general degree including fiscal management) in 1852. He then worked for two years as an officer in government offices, while he studied singing with Swedish tenor Julius Günther and the German tenor Wieser. In 1854 he was hired as a singer at the Mindre teatern run by actor and theatre leader Edward Stjernström, and debuted in the autumn in the role of Farinelli in the play of the same name. But it was during the spring of 1855 that he received his real breakthrough with the role of Asmodeus in Den ondes besegrare (The Demon’s Conqueror). The reviews from that year describe his handsome appearance and beautiful voice.

In 1858 he was employed as a vocal soloist at the Kungliga Teatern (the Royal Opera) in Stockholm, where his debut role was as Figaro in The Marriage of Figaro. In 1859 he began his work as a translator, mainly of French librettos, while at the same time continuing his career singing baritone roles. In 1861 he received a one-year appointment as director of the Kungliga Teatern. Fritz Arlberg shared an interest in Richard Wagner, whom he had met personally, with several of his colleagues, and together with them pressed the theatre to present Wagner’s works. Arlberg translated The Flying Dutchman and Rienzi into Swedish, the latter a production that he himself directed. Opera director, in the current meaning of the term, did not exist at that time. However, Arlberg developed the art of directing opera using a new analytical method of working, scene by scene, while holding discussions with the singers in order to achieve greater psychological believability.

Arlberg was also active as a vocal teacher and taught both his colleagues and students outside of his theatre work.

From Stockholm to Kristiania and Copenhagen

Fritz Arlberg’s numerous roles at the Kungliga Teatern included Valentin in Gounod's Faust, Marullo in Verdi's Rigoletto, Malatesta in Donizetti's Don Pasquale and Telramund in Wagner's Lohengrin, totalling between thirty and forty premiere roles. In addition he sang many roles from the standard repertoire of the time, a type no longer presented, primarily French musical theatre and comic opera. As a concert singer, he performed in both the Scandinavian capitals as well as in smaller towns. He spent many summers in Dresden continuing his musical education.

Arlberg left the Kungliga Teatern in 1874 after a schism with the kapellmästare (chief conductor of the Royal Court Orchestra) who was also his brother-in-law, composer Ludvig Norman. He then sang with Ludvig Josephson’s newly founded opera company in Kristiania (the former name of Oslo) until 1877, while at the same time continuing to teach singing both in Kristiania and Copenhagen. In 1877, he returned to Stockholm where he performed mainly with the Mindre teatern.

Over time, Arlberg came to be controversial as a singing teacher, due to his public and eloquent criticism of the current French-oriented music education. His book, Försök till en naturlig och förnuftig grundläggning af tonbildningsläran (Endeavours toward a natural and rational foundation for the teaching of vocal production), was published in 1891 and aroused a great deal of attention. During this same time period, several of his students were experiencing a large degree of international success. In his book, he mainly criticised those aspects in French vocal training that he felt were contrived. Instead, he advocated for vocal training with a Swedish language foundation, free breathing and natural diction.

His legacy within vocal pedagogy has survived to the present day through, among others Oscar Lejdström, a Swedish opera singer and music teacher, and through throat and nose doctor Gillis Bratt, who worked with the physiology of voice production, as well as their successors. Arlberg’s son, Hjalmar, carried on his father’s work through his own singing and as a vocal teacher in Leipzig as well as other cities.

As a composer, Arlberg has devoted himself almost exclusively to lyrical romances for solo song and piano, primarily beginning in 1865. He texts were most often chosen from the German author Heinrich Heine’s poetic texts, which particularly appealed to him. Musically, his songs have been influenced by Schumann, however his admiration for Richard Wagner is clearly expressed in the interesting earlier songs, Två visor om döden (Two songs about death) from 1869. Wagner’s influence here is striking, not only because of the expanded harmonies and the use of chromatic elements. In the fifth measure of the first song, Arlberg inserts a Tristan chord, this in a time when few in Sweden had heard Wagner’s Tristan and Isolde, which premiered in Munich just four years earlier. It would take 40 more years before the Swedish premiere. Vocally these songs require a sustainable middle range so as not to be drowned out by the piano accompaniment that partially lies above the vocal part.

Of all of his lyrical romances, the best known, most performed and most recorded is ‘Svärmeri’ (‘Träumen’). All of his songs with German texts also have Swedish texts. However, it is unclear whether it was Arlberg himself who translated them or someone else. That Arlberg was a singer is evident in his feeling for the vocal melodic lines, while at the same time he mastered the art of writing piano accompaniment.

Arlberg often used vocalisations from his compositions for teaching purposes. From his student and colleague, Carl Fredrik Lundqvist, we know that they were used within the pedagogic process to practice the vocal expressions for different moods.