Victor Fredrik Albert (Viktor Fredrik Alberto) Brandt was born in Stockholm on 10 June 1878 and died there on 1 February 1940. He was a flautist, violinist and composer. He graduated from the Royal Conservatory of Music in 1906 and was the bandmaster for the Royal Älvsborg regiment 1911−1926. He played with the Royal Court Orchestra, the Stockholm Concert Society and Gothenburg Orchestral Society.

Victor Brandt began his studies at the Kungliga Musikkonservatoriet (the Royal Conservatory of Music) during the autumn term of 1894 at the age of 16. Brandt’s participation in a number of student concerts in the autumn of 1896 − one of which was a solo concert − must have made a good impression on the audience, since in 1987 he was employed as deputy flautist in the Hovkapellet (the Royal Court Orchestra).

Brandt’s name disappears from the Musikkonservatoriet’s records in the spring of 1989. However, it seems that Brandt remained associated with the conservatory, studying composition and orchestration with Ernst Ellberg and violin with Johan Lindberg. In 1906 he graduated with a degree in military music; his status in the conservatory’s examination records at this point was ‘previous student’. Brandt played with Hovkapellet until 1910 and was also active in Stockholms konsertförening (the Stockholm Concert Society) from 1902 to 1909. An Andante Religioso by Brandt was performed at the society’s folk concert in Katarina Church on 5 May 1907, under the baton of Tor Aulin. 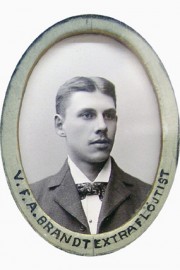 Bandmaster of the Älvsborg regiment

In 1911, Brandt took the position of bandmaster for the Royal Älvsborg regiment, succeeding the well-known and widely appreciated Albert Löfgren. New regulations required Brandt’s presence at the regiment on Fristad moor, outside Borås, and he therefore moved to south-western Sweden. The job as bandmaster was a civilian position with no military function. Brandt was only employed to lead the military band; his responsibilities included providing new music and new arrangements for the regiment’s relatively large band.

Several of Brandt’s compositions and arrangements have been preserved in the archive of the Älvsborg regiment band in the Krigsarkivet (the War Archive, Stockholm). This material includes various marches such as ‘Överste Lagerkrantz’, ‘Nils Vilhelm marsch’ (dedicated to Major af Wetterstedt), ‘Häroldsmarsch’ and ‘Vid Ärtingen’ (‘Gamle Blumster stack åt sjön …’) with lyrics by K.A. Rignell. ‘Vid Ärtingen’ was performed, along with other pieces, at the memorial service for the regiment’s anniversary in 1924. In addition to the marches, Brandt composed Fest ouvertur op. 20 in three movements for military orchestra, dated Gothenburg 15 April 1916. Brandt also used his familiarity with repertoire gained during his time with the Hovkapellet to arrange material from Die Blaue Mazur and Lohengrin for military band.

During his years in western Sweden, Brandt also played violin in Göteborgs orkesterförening (the Gothenburg Orchestral Society). The orchestra, conducted by Brandt himself, performed Brandt’s Andante religioso at a popular concert on 26 March 1911. At the same concert he performed the solo in the Danish composer Joachim Andersen’s Ungersk fantasi for flute and orchestra.

Brandt was one of eleven founders of the Sveriges militärmusikdirektörsförening (the Swedish Military Bandmasters’ Association). He and a few colleagues invited all of the country’s military bandmasters to a conference at the Kungliga Musikaliska Akademien (the Royal Swedish Academy of Music) in Stockholm on 3 September 1918. On this occasion, the Sveriges militärmusikdirektörsförening was founded in order to further the bandmasters’ professional, social and economic interests. Brandt was a member of the interim board of directors elected at the conference. He also was part of a delegation that visited the Minister of War to appraise him of the new association. Brandt served as secretary on the association’s first regular board from 1918 to 1922.

Bandmaster Brandt was described as a conscientious civil servant and a skilled musician and music director, although his brusque manner occasionally caused conflict within the band. His time at the Älvsborg regiment was marred by the band’s enforced relocation from the purpose-built premises on Fristad moor, to unsuitable premises at the caserns in Borås, as well as the new Head of Regiment’s lack of understanding for the difficulty of marching and playing at the same time.

In the aftermath of the 1925 national disarmament, the Älvsborg regiment was subjected to major cuts in 1927, which led to Brandt being placed on a so-called voluntary unattached list (a form of employment for redundant officers which meant both reduced salary and duties). Brandt moved back to Stockholm and apparently spent the rest of his career as a violinist in Stockholm’s musical life. Victor Brandt died on 1 February 1940 at the age of 61.