Born on 25 February 1779 in Ginst in Swedish Pomerania, died on 14 April 1813 in Kisa, Sweden. Music director of the court theatre in Mecklenburg-Schwerin in 1802, travelled to Stockholm the following year where he was employed by the Royal Court Orchestra as violinist (1803−07) and then as hovkapellmästare (chief conductor) (1808−11). He conducted the first Swedish production of a Mozart opera (The Magic Flute) and introduced Beethoven’s early symphonies. He composed in a Viennese classical style with features of romanticism. In his final years he also became a collector of folk songs. Elected into the Royal Swedish Academy of Music in 1807. 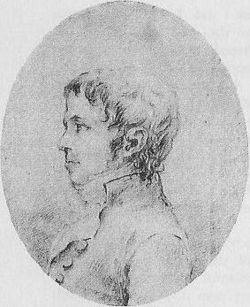 Joachim Georg Nicolas Eggert was born on 25 February 1779 in the little town of Ginst on the island of Rügen in what was then Swedish Pomerania. Given that both his father and uncle were cobblers, his excursion into music was not exactly what had been expected of him. He started to learn the violin at the age of 11 under the tutelage of a local artisan, but progressed to more grounded guidance a year later when a new school teacher and organist by the name of Johann Friedrich Dammas arrived in Ginst and started to give Eggert after-school lessons in piano, violin and harp.

In 1794, Eggert travelled to Stralsund to study for Friedrich Gregor Kahlows. His main focus here was on violin and composition, but apparently he also began to write dance music, possibly to earn his keep. He remained in Stralsund for six years until 1800, when he moved to Braunschweig. Here he spent two years completing his studies for Ferdinand Fischer, a teacher named Markmann and, above all, Friedrich Gottlob Fleischer.

Eggert was subsequently engaged as the music director of the court theatre in Mecklenburg-Schwerin, a position that he resigned after only six months. He returned to Ginst, where he prepared for his future by composing and garnering recommendations. He joined the Stralsund Freemason lodge, thus forging suitable links with St Petersburg, his intended destination, and with Germano-Swedish society in Stockholm. Perhaps it was his Stockholm connections that made Eggert take that particular route to St Petersburg, perhaps it was the good reputation of the Kungliga Operan (the Royal Opera); whatever the reason, once in Stockholm, any desire he had to continue his journey evaporated.

One reason for Eggert’s settling in Stockholm could have been his weak health; even back in Ginst he had suffered from the consumption that would eventually cut his life short, and even though the Swedish climate was grim at times, it was decidedly better than St Petersburg’s. However, it is likely that his social and financial circumstances weighed heaviest. Already a month after his arrival in Stockholm on 7 July 1803, Eggert was engaged as a violinist at the Hovkapellet (the Royal Court Orchestra). He was just as prompt at making connections with a large section of Germano-Swedish society and numerous Freemasons, and it also seems he quickly became popular in Stockholm’s music circles. A testament to his prominent position was the official commissions for ceremonial music that he started to receive within his first year in the city and would continue to receive throughout his sojourn in Stockholm. A composition by Eggert first appeared on a concert bill in the city on 14 May 1805.

Exactly two years later, on 14 May 1807, Eggert made his first public appearance at the podium, conducting several of his own works. The concert was advertised as a kind of valedictory performance, as Eggert was planning to leave Stockholm for St Petersburg, having lost his position with the Hovkapellet in connection with the announced closure of the opera by King Gustav IV Adolf. However, this journey to St Petersburg was also cancelled.

In 1807, Eggert was elected into the Kungliga Musikaliska akademien (the Royal Swedish Academy of Music), oddly enough as a foreign member despite his being born on Swedish territory and having been a resident of Stockholm for the previous four years. The academy’s decision was possibly due to his planned departure, because he was later resituated amongst the Swedish members.

February 1808 saw the dismissal of the then hovkapellmästare (chief conductor of Hovkapellet) Johann Christian Friedrich Haeffner, but owing to the Napoleonic wars, his successor, Johann Heinrich Küster, who had been contracted in 1807 in Rome, was not able to replace him until the end of 1809. It was on account of this that the Hovkapellet engaged Eggert as hovkapellmästare on an implicitly pro tem contract in February 1808. This position he went on to hold, however, until January 1811, despite the fact that Küster had been officially appointed back in April of the previous year (but remained as second kapellmästare until Eggert’s departure).

During his years as hovkapellmästare Eggert, for understandable reasons, made frequent appearances as conductor, mainly of orchestral music and preferably of the Viennese classics. He introduced Haydn’s Four Seasons and Beethoven’s early symphonies to the Stockholm public, and on 30 May 1812 became the first person to perform an entire Mozart opera (The Magic Flute) in Sweden. He also often conducted his own works.

In addition to conducting, Eggert taught a great deal (with Edmund Passy, Martin de Ron and Erik Drake being of note amongst his composition students), but his planned lectures in music theory never took off owing to a lack of public interest.

That Eggert was able to conduct The Magic Flute at the Kungliga Operan, despite the post of hovkapellmästare having been filled by Küster two years previously, is an indication both of the high regard in which he was held, and of the low standing of Küster. Maybe this was why Eggert remained in Stockholm until the summer of 1812. His final orchestral concert he conducted on 9 March 1811, with a programme composed exclusively of his own works. It is not impossible that Eggert entertained hopes of Küster’s resignation so that the post of hovkapellmästare would fall to him, but Küster had no such intention; besides, the popular Edouard Du Puy, who had served as leader of the Hovkapellet between 1793 and 1799 (when he was exiled), had returned to Stockholm in 1810. Eggert was unable to compete with Du Puy, who went on to become hovkapellmästare in 1812.

Eggert left Stockholm for Germany in June 1812, planning to spend the summer at the Föllingsö estate of his friend and former pupil of composition Erik Drake. Together with Drake and Leonard Fredrik Rääf, Eggert collected and wrote down folk songs, which would later be included in Afzelius and Geijer’s Svenska folkvisor från forn-tiden (1814−16), although without any credit given to Eggert, Rääf or Drake. Eggert’s interest in folk songs was also manifested in his desire to compose a Swedish national opera on a Nordic theme, something that he never managed to do.

The second leg of Eggert’s journey south was initially delayed by troubles on the continent. Then, on 19 October, he suffered a serious bout of consumption, and all travel plans were suspended. His health deteriorated over the winter and on 14 April 1813 Eggert died at Rääf’s nearby Thomestorp estate, where he had been transferred a month before. He was given a ceremonial burial on 21 April in Kisa Church.

Eggert composed in a fully developed Viennese classical style influenced by Haydn and Mozart. His works are often uncluttered, uncomplicated and classically balanced, but also contain romantic features such as richly differentiated dynamics and dramatic effects. His orchestral music is always for large ensemble, with double woodwind, often four horns and percussion. One of his symphonies even demands three trombones. This large orchestra Eggert employed with great skill, variation and imagination.

Eggert composed four symphonies (C minor, E-flat major, C major and G minor) and left a fragment of a fifth (D minor). All of them are classical in form and proportion. They all have four movements (with the exception of one symphony, which has three), open with a first movement in fully developed sonata form, and have a minuet as the penultimate movement. However, as already mentioned, Eggert combined this balanced classicism with a romantic, imaginative and dramatic mode of expression. It was above all in his symphonies that Eggert did full justice to his talent.

However, he also devoted much of his compositional energies to chamber music, particularly string quartets, twelve of which he managed to complete before his premature death. Apart from the personal idiosyncrasies that often show through, the music is Haydnesque throughout. As in his symphonic works, the dynamics are richly differentiated; nuance notations are many and range from ppp to ff. Many of his quartets carry folk song influences and, at times, other romantic traits. Eggert also composed a piano quartet, a sextet for clarinet, horn and strings, and a string sextet.

Within a year of his arrival in Stockholm, Eggert received a commission to compose music for Duke Fredrik Adolf’s funeral. Writing music for official ceremonies and other specific occasions was a regular occupation for Eggert, not least during his time as hovkapellmästare. Works of this kind include music for Carl XIII’s coronation, Begravningsmusik till Fredrik Adolfs död, Cantate vid firandet av freden mellan Ryssland och Sverige år 1809 (a cantata to commemorate peace between Russia and Sweden in 1809), Cantate vid Carl Johans ankomst till Stockholm 1810 (a cantata to honour the arrival of Prince Carl Johan Bernadotte to Stockholm in 1810) and Cantate till förmån för Stockholms Erikshus (a cantata for the benefit of the Stockholm Erikshus).

As chief conductor of the Kungliga Operan, Eggert composed incidental music for two plays: Mohrerna i Spanien (1809) and Svante Sture (1812), of which at least the former was a great success, notching up 40 performances until 1835.

Eggert’s symphonies were performed on a dozen or so occasions during his lifetime, from which one may conclude that they were popular with the Stockholm public. His regular commissions for works to perform at official celebrations suggest the same. It is also probable that his chamber music was often played amongst the city’s music aficionados, many of whom he was well acquainted with. None of his compositions were printed during his lifetime, however, and it was not until 1816−1818 that Breitkopf & Härtel of Leipzig, through the agency of Eggert’s brother, published his piano quartet, a G minor string quartet, the wind sextet and the C minor symphony. Despite this, his achievements were soon forgotten and he can hardly be said to have made an impact on future generations of composers. Eggert’s works are still waiting to be re-discovered.