Valborg Aulin was born on 9 January 1860 in Gävle, and died on 13 March 1928. She had a significant career as a composer in her hometown of Stockholm, which was interrupted in 1903 when she moved to Örebro to work as a music teacher. During her active years as a composer, she had numerous works published and performed. With a good education and heavily influenced by her musical upbringing, she wrote music that was much appreciated during her lifetime: mostly works for home and the salon, which, although influenced by French music, still belongs within the Scandinavian tradition. 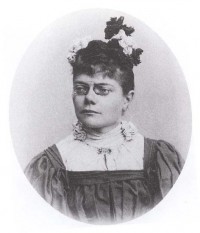 Valborg Aulin was born in Gävle where her father, Lars Axel, worked as a schoolmaster and met his bride-to-be, Edla (née Holmberg). A year after Valborg was born, the family moved southward to Stockholm, where, in 1866, her brother Tor was born. He would go on to become a violinist and composer. Like so many other composers, Valborg Aulin began her music studies at home, and later took private lessons. The choice of private teachers from among professional musicians and composers such as Jakob Adolf Hägg and Albert Rubenson clearly indicates that her parents intended for her to continue on with an advanced music education and a career path as a composer. Rubenson was the director of the Kungliga Musikaliska akademien (the Royal Swedish Academy of Music), which would have strengthened the objective that she would go further with her music studies. From 1877 to 1882 she studied at the Musikaliska akademien, where she had teachers such as Hilda Thegerström on piano, Hermann Berens and August Lagergren for composition, as well as Albert Rubenson and Ludvig Norman, orchestration.  Norman became an important supporter until his death in 1885. Valborg Aulin expressed her deep sorrow immediately after his passing in her composition Pie Jesu Domine for choir and orchestra.

Thanks to a Jenny Lind grant from the Musikaliska akademien, Valborg Aulin was able to study outside of Sweden during the years 1885−1887: in Copenhagen with composer Niels Gade (he also taught her teachers Rubenson, Norman and Hägg), followed by a shorter visit to Berlin and three years in Paris, where she took composition lessons from Benjamin Godard and studied under female pianist, E. Bourgain, and to a lesser extent, worked under Jules Massenet and Ernest Guiraud. Trips abroad during that time meant attending concerts in order to hear works and the musicians who interpreted them, which one was not able to take advantage of at home. During her foreign travels, Valborg Aulin therefore, acquainted herself with what was for her, new music. The singer, Anna Aulin, her brother Tor’s second wife, wrote about Valborg in her diary, ‘Despite her total lack of outward charm, which Frenchmen are so highly appreciative of, she became popular due to her immense talent’. In Paris she created two larger works, probably under some kind of guidance by one or more of her occasional teachers: Tableaux Parisiens for orchestra and Procul este for solo voice, choir and string orchestra. She stopped composing in these forms after her Paris visit and continued writing mostly chamber music, as did many of her female and male colleagues of the time. The possibilities of having an orchestral work performed were small as there was only one professional orchestra, namely the Hovkapellet (the Royal Court Orchestra) for which concertising was only a smaller part of their work. Most composers therefore avoided creating larger works.

Teacher, musician − and the final phase as a composer

Once back at home, she taught piano and harmonic theory, but performed also as a pianist in Stockholm and on tours around the country − occasionally with her brother, Tor and his string quartet. Her compositions were comparatively well distributed, especially several published works. One string quartet, no. 1 in F major, which she dedicated to her teacher Rubenson, was printed in 1888 by the Musikaliska konstföreningen (the Swedish Art Music Society) and reprinted in 2001. Her second quartet was printed by the same publisher as late as 2005. It is revealing that she had several compositions that were typically suitable for home or salon performances, printed in magazines such as Musik för hemmet (music for the home) and the Svenska familjejournalen (Swedish family journal). She was also highlighted in evening events in which her own compositions were presented in 1896 and 1901. Valborg Aulin definitely belonged to the inner circle of established composers of her time.

At age 43 she left the city she grew up in. Even though private teaching was her main activity during her 25 years in Örebro, she also performed as a pianist. In addition, she arranged concerts. It is not known why she left Stockholm, but the difficulties of being female and accepted as a composer have been suggested as one reason. She may also have wanted to leave the competitive music life of Stockholm behind, and at the same time desired to move away from her mother, with whom she was still living. The fact that Valborg Aulin, in her mid-40s, left the capital city and ceased to compose, in effect meant that her works more or less disappeared from the concert programmes.

Valborg Aulin’s compositional output was dominated by two types of works: piano pieces and works for voice and piano. Both types couple her creativity to smaller performance contexts. That does not mean that her music was mainly appropriate for amateur music making. Although a number of works are certainly meant for less experienced singers and instrumentalists, especially those compositions published in magazines, many of her works have a technical complexity aimed at well-trained musicians. This can be seen in the dedications, which name professional singers and instrumentalist such as Dina Edling and Hilda Thegerström, among others.

With the exception of a sonata in four movements, op. 14, her piano compositions consist of works with a single movement, which in two cases form a collection of pieces. These compositions are mood pieces in which the character of the piece is typically already expressed in the title. The dominance of works with a single movement is somewhat puzzling as she was a prominent pianist who performed regularly, and as such could play her own works in larger forms. Possibly the number of single-movement works can be explained by her desire to have her compositions in published form, where minor works sold better than larger compositions. Income from the sale of printed works was important to composers at the time before modern copyright laws allowed for compensation for performances of works.

Valborg Aulin’s works for solo voice and piano are really more artistic songs than they are expressive romances. Almost all of the texts were written by three contemporary authors. The majority of texts she set to music were poems by Karl Alred Melin. Today he is unknown, even though he was a member of academy and attracted, among others, composer, Ludvig Norman to set his poetry to music. Perhaps Melin’s popularity among other composers lies behind Valborg Aulin’s repeated choice of the author’s texts. The other writers, Carl David af Wirsén and Johan Ludvig Runeberg, were both objects of other composers’ interest as well.

The two string quartets are undoubtedly those works that have had the most lasting effect with their strong forms, and effectively written compositional style that reflect Valborg Aulin’s extensive training. The ambitious quartets stand in contrast to much of her other work. One could ask why she did not return to the genre, which she clearly had mastered. She was after all only 29 years old when she completed the second quartet. Valborg Aulin was an early bloomer as a composer, who later abstained from that form of musical creation.

Other works for strings
Var det en dröm?, originally for song and piano. Arrangement for strings with obligato violin.