Richard Andersson, born 22 August 1851 in Stockholm and died 20 May 1918, was a Swedish pianist, teacher and composer who influenced generations of pianists and composers through the highly distinguished music school that he founded in 1886. As a composer, he composed music and songs, and made several arrangements of Swedish folk music. He was elected into the Royal Swedish Academy of Music in 1890, and taught at the Royal Conservatory of Music in Stockholm between the years 1904 and 1906, receiving his professor’s title in 1912. 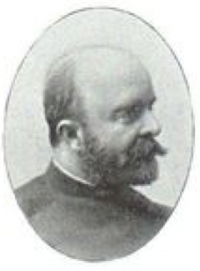 Ernst Christian Richard Andersson was born in Stockholm on 22 August 1851, but grew up in Karlskrona, to where his parents moved when he was two. He took up the piano at an early age, at first for his mother and subsequently for various piano tutors in the town. In 1867, at the age of sixteen, he was enrolled as a pupil at the Musikkonservatoriet (the Royal Conservatory of Music) in Stockholm, where he studied piano for Jan van Boom and, after van Boom’s death in 1872, for Ludvig Norman. He also studied harmony for Otto Daniel Winge, advanced organ for Gustaf Mankell and counterpoint and composition for Hermann Berens. In 1872 the 21–year old Richard Andersson gave his debut performance playing Beethoven’s G major concerto at one of the symphony concerts of Hovkapellet (the Royal Court Orchestra). On graduating from the conservatory in 1874, he continued his studies with Hilda Thegerström, who had succeeded van Boom as piano teacher for the institution’s artists’ class in 1872.

In the autumn of 1876, Andersson travelled to Berlin, where he spent the winter studying piano technique under the tutelage of Clara Schumann and composition for professor Richard Wuerst. The following year and until 1884 he studied at the Königliche Hochschule für Musik in Berlin, where he was instructed in piano technique by Heinrich Barth and in counterpoint by Friedrich Kiel. It was not long before Barth discovered Andersson’s talents as a teacher, and he eventually let him take over his private students while he was away touring.

At the end of 1884, Andersson returned to Stockholm, where he gave a highly acclaimed performance of Chopin’s E minor concerto at one of the Hovkapellet’s symphony concerts. Up until the early 1890s, he went on to perform more than a score of concertos as a soloist, solo recital evenings and chamber music, usually with the Aulin Quartet. His repertoire included early keyboard music by Rameau and Scarlatti, the classics Mozart and Beethoven, as well as Schumann, Brahms and less complex contemporary piano works. He was regarded as a leading interpreter of Chopin, and Swedish composers such as Norman and Sjögren featured regularly on his playlist.

However, it was no easy feat to make a living as a pianist in those days, and Andersson found himself heavily in debt after his long period of study. He was 33 when he returned from Berlin, and in October 1885 he advertised that he was ‘receiving students of piano’. The following autumn, he and Emil Sjögren, a fellow student, founded Richard Anderssons musikskola (Richard Andersson’s Music School), which quickly made a name for itself in Swedish music circles and ended up influencing generations of music students.

At first, the school offered courses at beginner and intermediate level, but soon added professional training to its prospectus. The high level of piano playing that typified the music scene in the first half of the 1900s was very much to Andersson’s credit. Amongst the pianists and composers who would carry Andersson’s legacy further were Wilhelm Stenhammar, Knut Andersson and Knut Bäck, Gustaf and John Heintze, John G. Jakobsson and Adolf Wiklund. The school’s pupils also included musicians who would go on to make significant contributions to teaching, such as Karl Wohlfart, Gottfrid Boon and Astrid Berwald.

It also seems that Andersson had always had ambitions as a composer, but being a much sought-after pianist and then devoted tutor, he had limited opportunity to compose. Consequently, most of his compositions were written during his student years from 1867 up until 1884, when his responsibilities as a performer and teacher became too overwhelming. Fourteen of his nineteen numbered works were written during this period, along with most of those lacking an opus designation.

The stylistic anchor of Andersson’s compositions is very much the 19th century classical compositional tradition. His models were Beethoven, Schumann and Brahms, with whose works Andersson was thoroughly familiar as a practising pianist. Of the Swedish composers, it was his teacher Ludvig Norman who exerted the most obvious influence.

His music is typically conservative for his time. The piano texture is often homophonic with triad arpeggiated full-finger chord accompaniment figures and plenty of octaves, but relatively little counterpoint. This distinctive style applies particularly to the technically more difficult works, such as the piano sonata, Höststämningar, the transcriptions in Svenska nationaldanser and, to a certain extent, in the piano parts of his songs. The shorter character pieces are rooted in a more intimate pedagogical tradition.

The most important piano piece is the piano sonata in D major from 1878, it too composed when he was a student in Berlin. Most striking here are the Schumann influences in the first movement, while there are also distinct similarities with what would become the secondary theme of Wilhelm Stenhammar’s first piano concerto. The sonata was published by the Musikaliska konstföreningen (the Swedish Art Music Society) in 1889 and performed by the composer at a concert in 1891. It was also performed at the music school’s public concerts (in 1907 by Astrid Berwald) and as late as the 1960s in Rome by one of Andersson’s overseas students, Manorita de Andauga. The sonata is available as a recording by Stefan Lindgren.

Most of the piano pieces are of the romantic era’s character-piece format and are short works of moderate complexity, clearly written for teaching purposes. Many of them are paraphrases of folk dances, folk tunes from different countries or mood imageries. Andersson placed much emphasis in his teaching on finding and fashioning the content of every individual piece. Judging by his often carefully detailed expression marks, much of this enterprise was about identifying the character of the music.

He was also deeply interested in Swedish and Norwegian folk music, and wrote a couple of music books containing transcriptions of Swedish folk songs and dances for two- and four-handed piano. Here too, the style is characterised by its broad chordic movement texture and classical harmony. The modal scale types and the Wagner-influenced chromatics that are the hallmark of Grieg’s folk music arrangements are conspicuously absent.

Andersson also wrote a dozen or so songs − the first at the relatively young age of 17 − the bulk of which, like his piano pieces, were written during his student years. The collection titled 12 Sånger was published in 1910 and garnered warranted attention. Going by the dates of composition ascribed to the songs, most were composed before 1884; the oldest is from 1869, while two were written in 1905 and 1907, the latter with a piano accompaniment not unlike the prelude to Skuggor och dagrar (1878).

Andersson’s piano training is also discernable in his songs, and like Schumann’s, his vocal parts are often woven into the piano accompaniment. Andersson’s broad pianistic and homophonic mind is also strikingly evident. The vocal parts are otherwise often folk-song-like in structure, and in their disengagement of melody and accompaniment from the strophic text structure, the songs often have a freer formal and rhetorical style.

Richard Andersson’s piano style was to influence many of his students, particularly Wilhelm Stenhammar, where it is recognisable in both his piano concertos and the three fantasies op. 11. The same can be said, up to a point, of Adolf Wiklund’s two piano concertos, and even Harald Fryklöf displays melodic turns that echo Richard Andersson. The most important aspect of Andersson’s compositional achievement is perhaps precisely this seminal influence he had on some of his most important students.

Pieces for piano (a piano sonata in D major, one-movement works and collections such as Skuggor och dagrar, Skizzen, 21 Skizzer, Swedish national dances for four-handed piano I-II), songs (the collection 12 Songs and individuals songs), and the odd chamber music piece, such as Fantasistycke for cello and piano op. 13.